Last weekend, against my better judgement, I went camping. 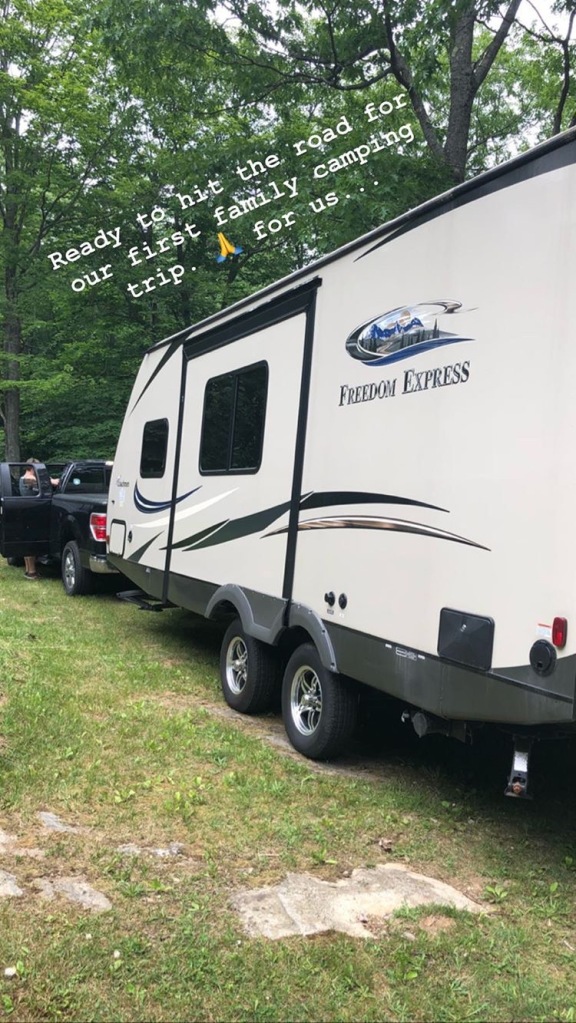 I knew from the beginning it was going to be a total shitshow, because that’s basically the definition of camping. But my husband was all – we’re making memories with our kids – and I was all – we really can’t afford to take them anywhere and stay in a hotel – so we borrowed my inlaws’ 5th wheel camper and made the trek to New Hampshire to sleep outside, in a location very similar to our driveway at home.

I spend a lot of time talking about how much I hate camping. I just don’t see the value in sleeping outside or on the ground or using public bathrooms or living in close quarters with strangers voluntarily. Add in the bugs, limited culinary options, set up and take down efforts and honestly just why. Like why is this a thing? Does sitting in an expensive LL Bean tent with an air mattress or an RV that costs more than some people’s homes with hundreds of other people in a designated driveway equipped with electricity and a sewer dumping station really make you closer to nature?

It makes you closer to other people’s shit is what it does. No fucking thank you.

Anyway I agreed to go because I already have enough mom guilt and this felt like a quick win on the super mom front. Plus we were going with our close friends and I had this delusion that the kids would go to sleep and we’d all get to sit by a campfire and drink tequila and feel relaxed.

We drove down to New Hampshire on Saturday afternoon. Dan had the camper hooked up to his dad’s truck and the kids were whining in the backseat per usual. About 10 minutes after leaving our driveway the kids started whining that they were hungry, and rightfully so, we forgot to feed them lunch in the scramble that was packing for 3 days in the “wilderness” plus charging and loading shows onto the ipad in preparation for 48 hours without wifi. Closer to nature my ass.

Because it’s impossible to do anything (like turn, or park, or go through a drive thru) with the camper we ended up in a Burger King parking lot for lunch. I thought I could be flexible and eat a chicken sandwich but once I opened it up I realized I just couldn’t do it. It just wasn’t even close to resembling chicken or any kind of actual animal. So Dan ate both our sandwiches and I dipped french fries in ranch. 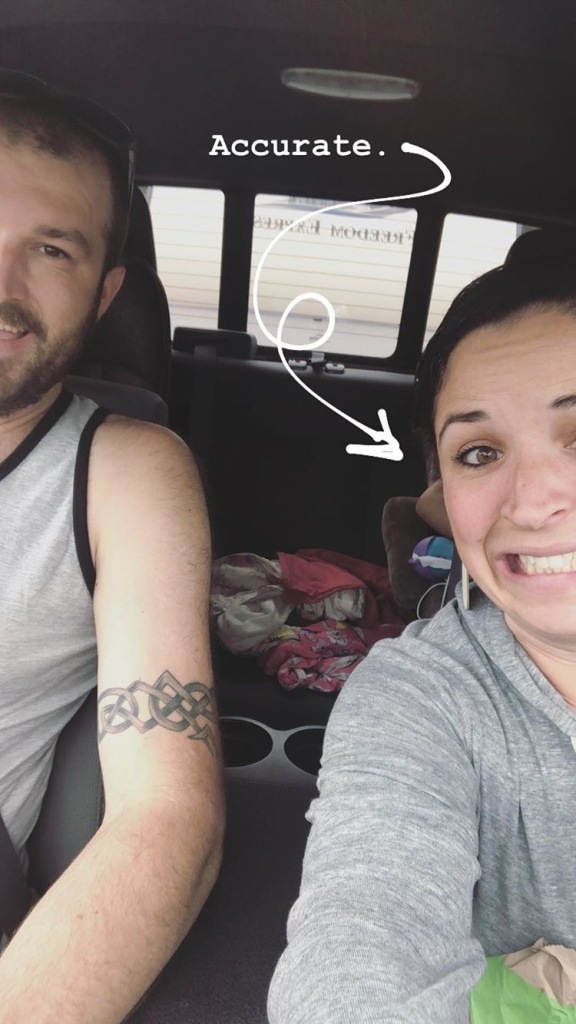 Two hours later we arrived at the campground and it promptly began pouring rain. Like, drenching. Dan asked me to get out of the truck and help him back the 26-foot camper through two giant trees into a tiny camping slot. I so wish I could have filmed it, but I left my phone in the truck and even though I considered asking Dan to hold on for a sec so I could grab it, in the end I decided the divorce would be too expensive.

About 30 minutes into the parking fiasco, Dan decided it would be easier to park the camper without kids and his wife screaming at him, so I unloaded the girls from the truck and took them to meet up with our friends at the pool. It was already pouring but as soon as we got to the pool it started down-pouring.

This didn’t deter the kids at all, in fact they were 100% fine playing in the pool in the rain until about 2 seconds before they weren’t and then they were NOT OK WITH ANY OF IT. The 10 minute walk back to the campsite was lovely.

Almost as lovely as the next 5 hours that we spent with 4 adults and 5 kids crammed into a 5th wheel camper trying to cook dinner and prepare the kids for bed.

Around 10pm the kids finally went to sleep, and there would be no sitting around a fire chatting because everything was soaked and the kids were def not cool with being in the camper by themselves. So I laid down to try to go to bed. About an hour later there was a large commotion involving the camper almost tipping over (apparently the footings had slid on the soaking wet ground) and Dan spent the majority of the night lying underneath the camper with a flashlight swearing.

At some point I descended into a full on panic attack, which was really fun trying to find my anxiety medication in the pitch black without waking up the monsters – I mean kids. I finally found the pill, and then realized I had no water to swallow it with. Dan encouraged me to try to swallow it with spit, while hyperventilating, which went about as well as expected. Eventually, in a panic, I grabbed the container of margarita mix and took a couple swigs to wash it down.

I’ll admit that the next day was slightly better. The kids woke up at the crack of dawn (but we’re used to that) and we had coffee and beer at a picnic table before getting on the road to StoryLand.

StoryLand was equipped with an unlimited supply of fried dough, roller coasters and Dunkin Donuts, and it didn’t rain, so everyone was in a better mood.

Except Lucy, who thought she wanted to go on the log ride…

…and then realized – NOPE.

We stayed at StoryLand all day, until about 4pm. Dan was ready to go back to the campsite earlier but I was clinging on to every second of civilization for as long as I could.

When we got back to the campsite the kids whined about being hungry and tired and cold – and we managed to distract them at the playground for long enough to make tacos, and a box of mac and cheese for them to eat after they universally rejected the tacos. Mia in particular ended up with a truly balanced meal of mac and cheese, with a side of shredded cheese and sour cream. And marshmallows.

The sunset that night was actually kind of pretty and we snuck onto someone else’s (more expensive) waterfront campsite so I could take a few pictures that made the trip look more glamorous than it was. 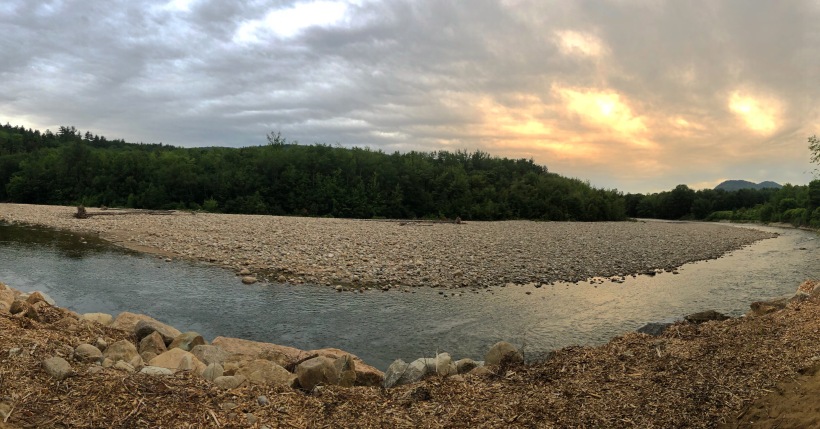 The last day of the trip was the closest to enjoyable. The kids ate pancakes and rode their bikes and lounged by the pool and it was sunny and warm and I knew I would be in my own bed that night.

Dan took advantage of this brief moment of relaxation to ask me if we could do the trip again next year. I told him camping is like having kids. Don’t ask me if I want another one while I’m still sitting on an ice pack from the first. I’m def over it for now – but maybe in a weak moment this winter I’ll concede to family camping trip #2.

4 thoughts on “On camping with toddlers, and other circles of hell.”