Welp, here we are again. Standing outside of the Picture People at Sears having a giant crying screaming tantrum. It’s become an annual tradition and honestly I was little nervous this year that the kids were going to be old enough to behave and the whole ordeal would be simple, boring and totally un-blog-worthy.

Lucky for all of you, and very unfortunately for me, the kids, the Picture People and everyone else just trying to get their Christmas shopping done at the mall today – it was a shitshow of epic proportions and I don’t know why I thought for even for one second that my kids could handle something as challenging as sitting on a fake stump for a bad photo. 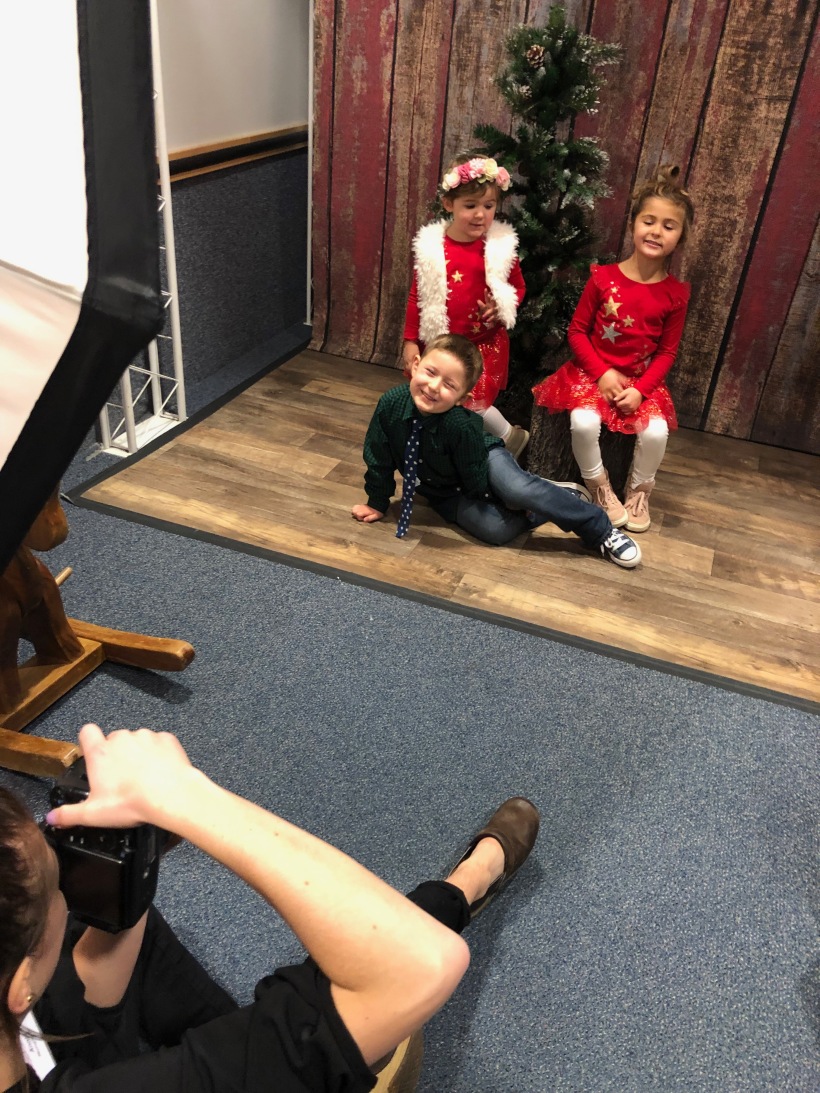 Actually, I do know why. Because my kids sit perfectly for photos all the time. Seriously they are like seasoned pros. I offer them marshmallows, they smile sweetly and hold hands. I snap a few hundred thousand photos and then we’re on to the next thing. They have both even modeled for clients – multiple times – with no issues.

But there’s something about the little photo room at the Picture People that just makes them PSYCHOTIC. They cry, they have to go potty. They literally cannot sit still, even for one second. They lick the props, leave the room, rat me out for taking pictures on my phone. EVERY. DAMN. TIME.

This time it was even worse. We started in a bad place – I had picked them up about 20 minutes earlier from a double sleepover with Grammie. No naps. They were both about 3 minutes away from falling asleep in the car during the 15 minute drive to the mall, but instead I dragged them out in the 14 degree parking lot and hustled them into the Sears bathroom to change their shoes and wipe all the boogers off their faces.

By this point we were at least 15 minutes late, and I still had to get them from the bathroom to the photo studio. It was only about 100 yards, but it might as well have been 100 miles thanks to the narrow pathways lined with plastic unicorns, LOL Surprise Balls and glitter coated emoji purses. The girls both had to touch every single one and then burst into tears as I dragged them away AGAIN.

My whispered threats of Christmas presents burning in the wood stove quickly turned to screaming threats of empty advent calendars and angry elves that were definitely NOT fucking coming back to our shelf any time soon. The 670 people in line to save up to 80% off at Sears probably thought I was the psychotic one, rambling on about how angry Princess (our elf) was about all the whining and how she was writing a note for Santa RIGHT NOW telling him to recall every single gummy he had set aside for the girls’ stockings.

You guys – this is all BEFORE we even started taking pictures.

When we finally got into the photo studio the 16 year old photographer got straight to work telling the kids how many degrees apart from each other to stand, which was hilarious because even if she had used terms that the kids understand like “right fucking here you little germ-mongering turd” they would not have even considered listening. They won’t even make eye contact for less than a pack of gummies.

Three hundred and forty “say cheeses” later, the photographer jumped up and exclaimed – I got one! They aren’t smiling but they’re all looking. 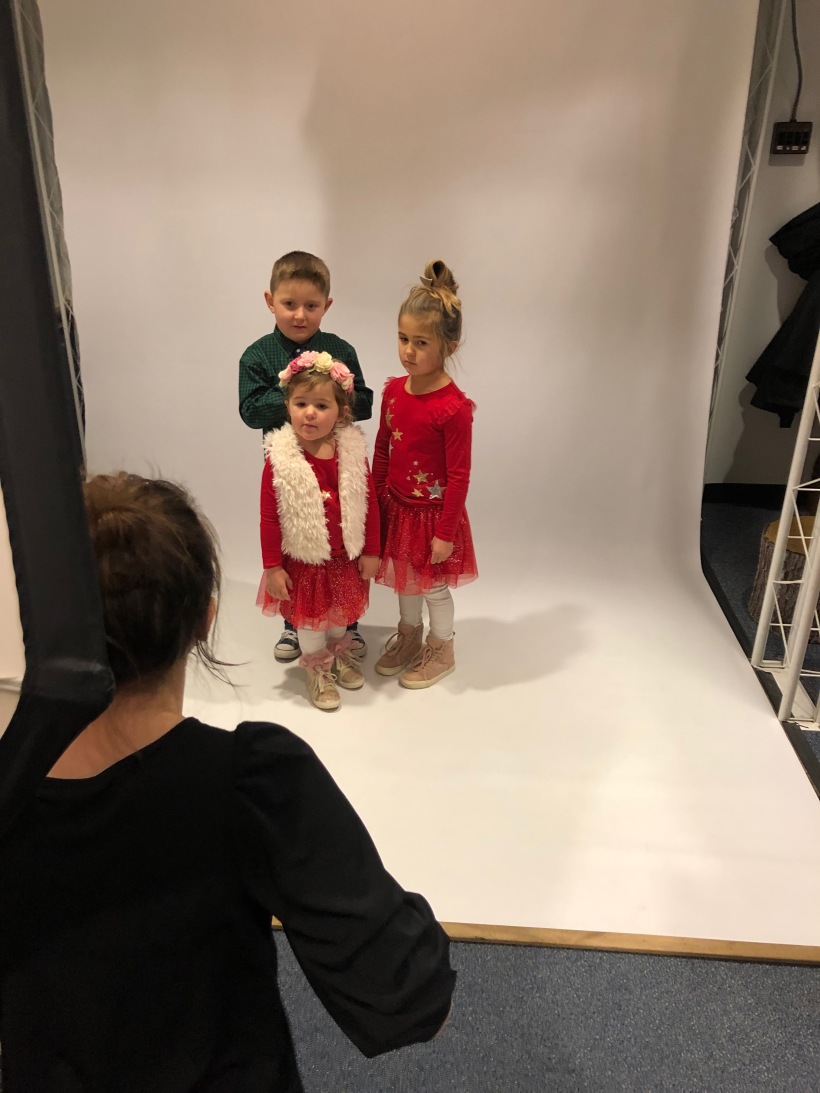 Steve, who had brought Dylan because Jenni was home with a fever, stared at me in quiet disbelief. Like, why do you do this?

Twenty minutes later we were both sweating and hoarse from yelling at the kids to say cheeseburger, look up, don’t touch your face, don’t lick the ornaments, stop ripping the backdrop, watch out for the tree and please for the love of god open your eyes for the picture. 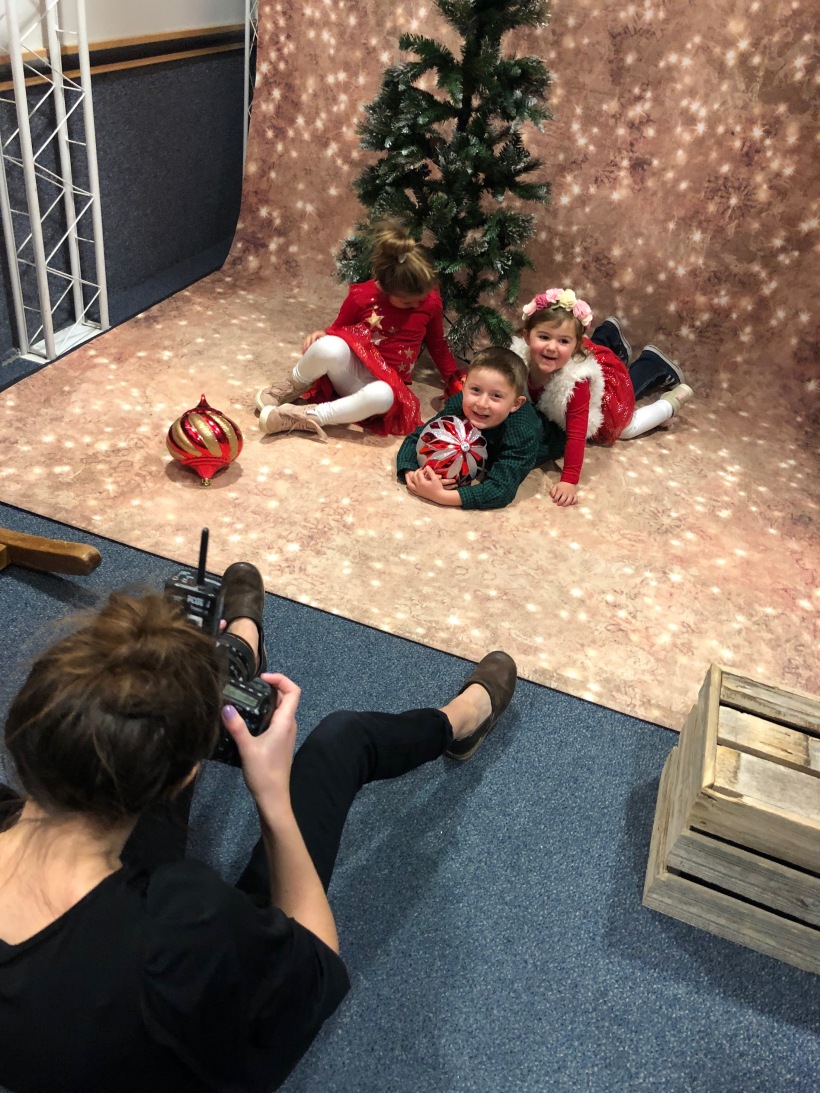 Eventually everyone just gave up and we herded the kids out into the waiting room to wreck havoc while we reviewed the hilariously bad photos.

The most entertaining part of the whole experience was listening to the sales-teenager try to find something nice to say about basically any of the photos as she went through them with us. She would say things like “oh this one is so cute – look Dylan’s eyes are really close to open” or “aww, everyone is looking in the same direction!”

Steve and I quickly selected the only photo where Lucy didn’t look Drunk and Dylan’s eyes were at least a small amount open. Mia was being Mia but I was out of gummies and the fact that she wasn’t blurry is a miracle considering she did not stop moving or yelling the entire time we were in the mall. Including the 27 minutes we waited for a hot dog at Johnny Rockets (which should be renamed Johnny Wheelbarrows or something much slower than a rocket) and the 34 minutes it took us to walk past the carousel, gum ball machine, giant electronic stuffed animals, virtual reality pods and the claw machine where you “win” horrendous plastic ducks.

By the time we got to the car there was a whole slew of old ladies staring at us while I threatened to cancel Christmas, gymnastics, school, food – basically anything I could think of to rescind. Here’s a snippet of our car ride home, about 26 seconds before both kids were OUT COLD – proving that picture day is almost as exhausting for them as it is for me.

Until next year, photo fiasco fans. Not quite sure how we’ll top this one.