When Dan and I decided to adopt a puppy 5 years ago, we knew wanted some kind of Pitbull mix. Especially in the South, Pitbulls have a horrible time getting adopted, due in part to their less-than-stellar reputation, and also because of the prevalence of dog fighting rings which produce injured, often malnourished, fearful and in many cases aggressive animals.

We did a lot of research and watched a lot of Caesar Milan videos and we were confident that with a lot of love, a truck-load of patience, and a firm, disciplined hand we could raise our wrinkly little Pitbull-Sharpei mix into a loving, gracious dog.

Five years and countless obedience classes, gentle leader harnesses and venison and sweet potato dog treats later, Harley, like most dogs, has had her moments, but for the most part is a gentle, loving, very lazy bundle of fur. 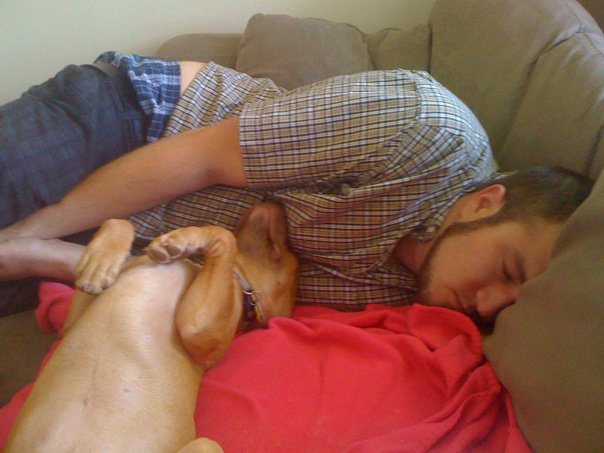 And then came her sister. 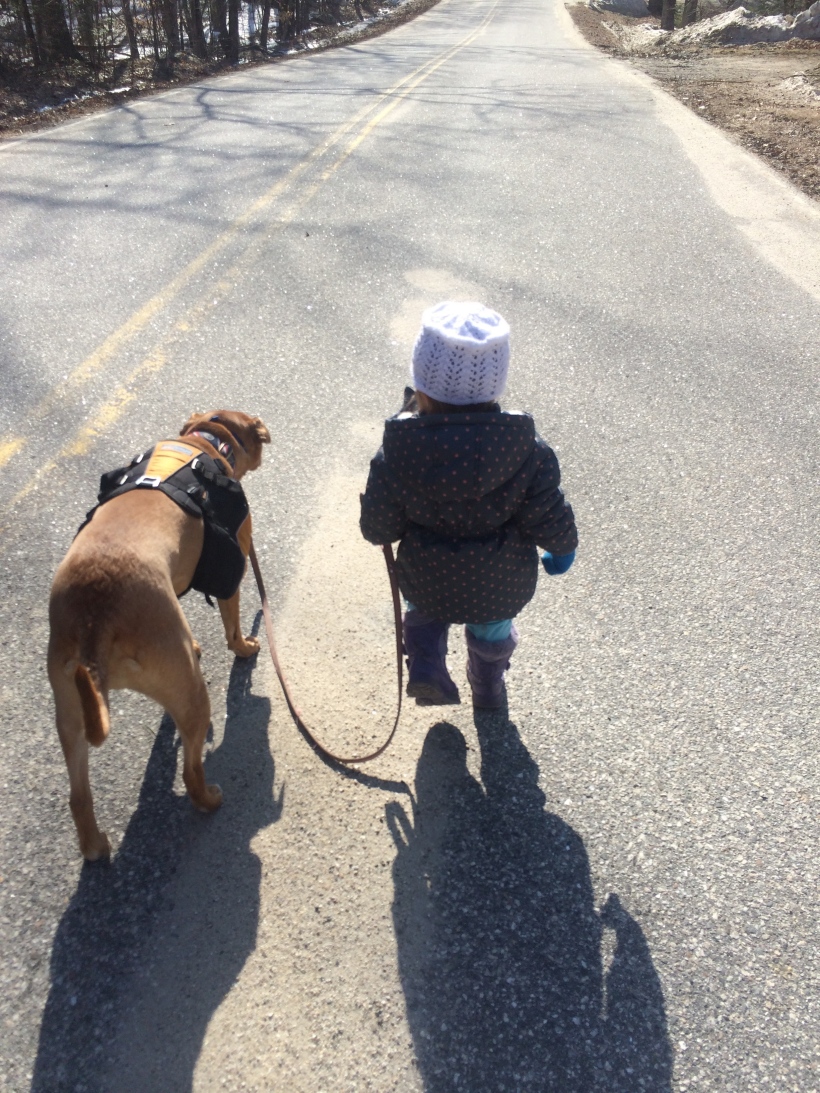 You see, nobody warned us 3 years later when we got pregnant – not one doctor or parent or counselor – that we might be faced with raising a Pitbull child. And that it would be way harder than raising a Pitbull dog.

Everyone is shaking their head is disgust right now that I just compared my toddler to a Pitbull.

But mostly it’s true in that she is so strong-willed she can bring a full grown adult to their knees in frustration. Without a saint’s supply of love, patience and understanding it’s frighteningly easy to be reduced to tears in just a few minutes time.

She tests every fiber of your being, every minute of the day. 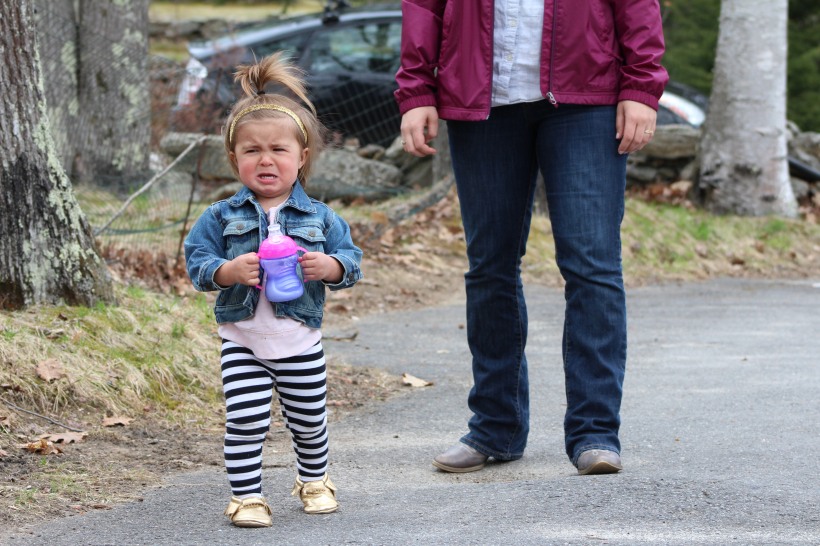 She laughs when you yell at her.

Squeals when you chase her.

Quivers her lip in perfect misery when you hold her back, or tell her no.

But Pitbull kids, unlike Pitbull dogs – they can’t be trained. 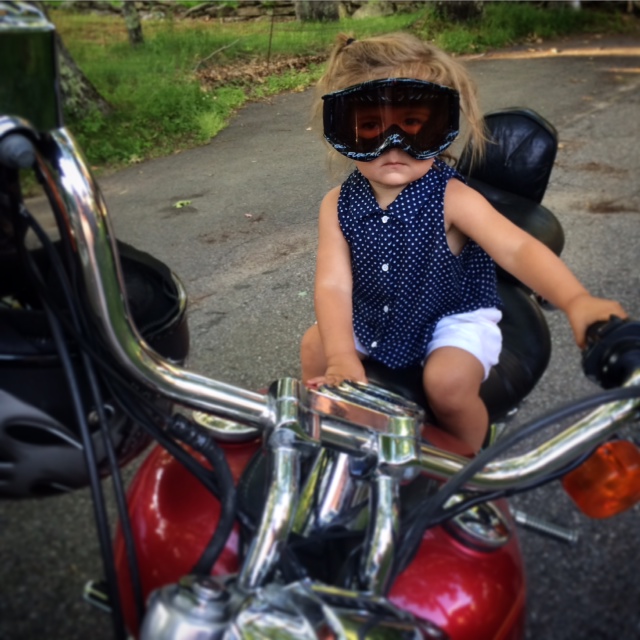 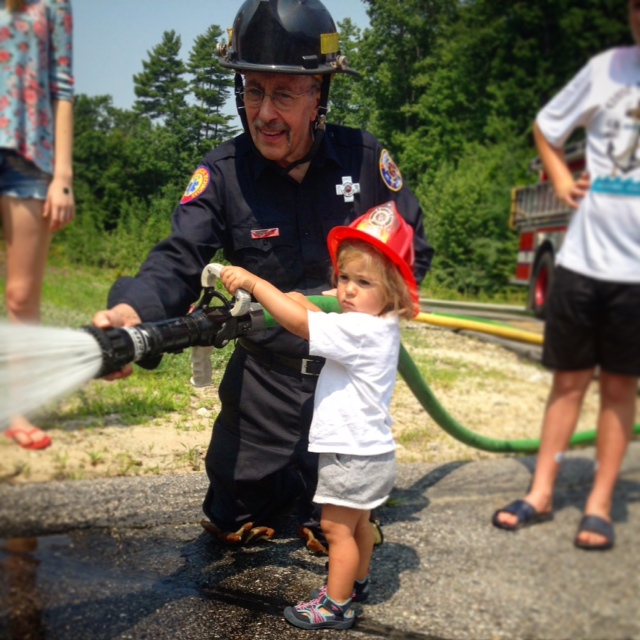 There is no amount of treats or classes or collars that can be applied to Pitbull children to teach them whose boss and keep them in line. There is only love and patience and acceptance.

Yesterday Mia peed on the couch cushion, on purpose. I asked her why and she said “because I wanted to.”

I asked her, “where are we supposed to go pee-pee?” and she replied, “on the potty.”

I asked her why she didn’t go on the potty and she shrugged her shoulders and said “because I like to pee on the couch!”

Then I doused the cushion in vinegar and covered it in baking soda to soak up the urine. I told Mia she could play on the couch, but not to touch the affected cushion.

She smiled at me and jumped onto the baking-soda-covered cushion.

In my firmest, most parental voice I warned her, “Get off that cushion now, Mia – or you will go into time out.”

Without missing a beat she scooped up a handful of vinegar-and-pee-soaked baking soda and ate it.

This is just another moment in the life of a mom with a “spirited child.”

It’s just another rung on the ladder in a day filled with tears, tantrums and ever-increasing demands.

Some days, I worry.

I worry that despite the knowledge that I was the same way as a kid – despite the feedback that being headstrong will serve her well in adulthood – I worry that maybe we’re raising a spoiled brat.

Maybe we’re not loving her enough. Maybe I didn’t breastfeed her for the right number of months. Maybe I should have gone in when she cried for me in the night. Maybe I shouldn’t have let her watch Caillou from 5-6am so I could sleep. Maybe I should have offered one type of sippy cup and never looked back. Let her starve instead of giving in to yogurt demands. Maybe I created this mess.

Either way it is hard. It’s so hard. Some days I lie in bed at night and berate myself for how often I yell. How firm I have to grip her arms to keep her in her seat at dinnertime.

And then every once in a while we have such a good day. A day without yelling or screaming or refusing to eat. 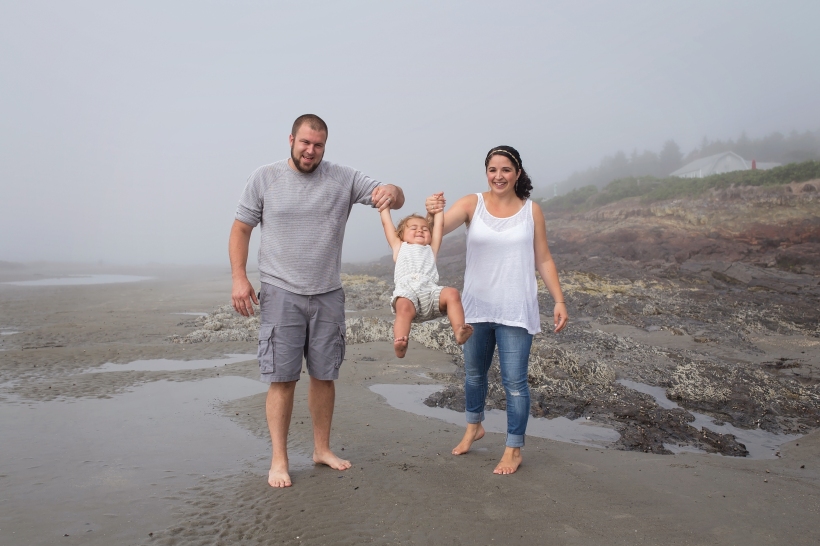 And then I think, what did I do wrong yesterday? What have I already fucked up tomorrow?

But in the end, I think, we are trying our best – and we love her more than anything in the world. Some days, that has to be enough. 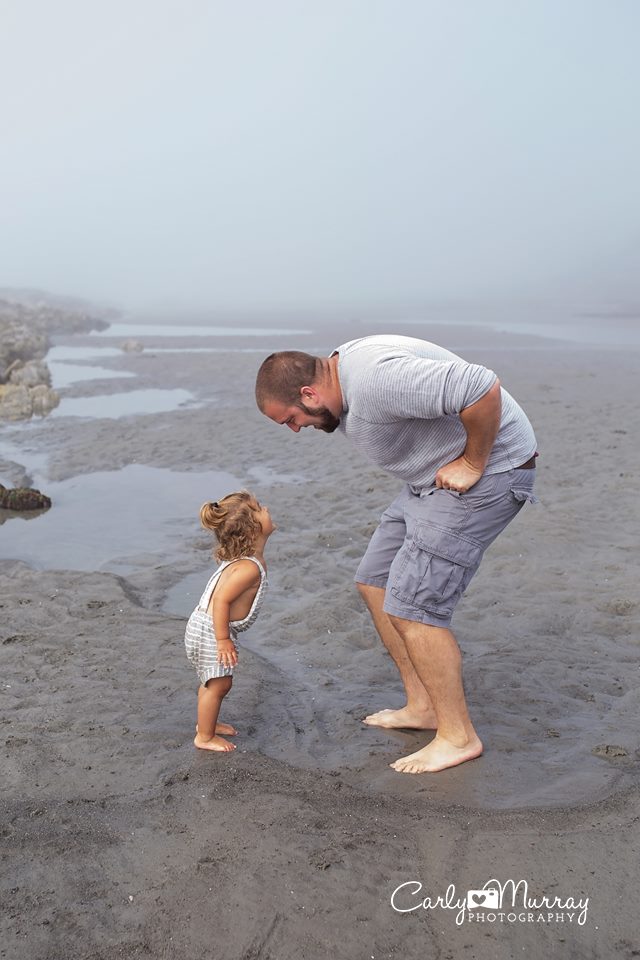 She’s a Pitbull, my little Mia. She knows what she wants and she knows how to get it.

Manipulative and forceful, passionate and loyal. She is the master of cuddles and slobbery kisses.

She makes us second guess if we are adult enough to raise her. Smart enough to guide her. Strong enough to contain her.

I can’t be sure of any of those things. But I know one thing. Our hearts will never be big enough to hold all the love we have for her. Not just on the good days, but every day.

Because even in those hellish moments – when I want to cry in frustration – something deep down inside of me feels a little bit of pride. Pride that my genetics yielded something so powerful. So passionate. So sure of herself and her body and her space.

She’s a pitbull, my little Mia. And I wouldn’t change it for the world.

To all the mamas out there of strong willed children – you probably won’t ever get a thank you note. But I hope you know they appreciate you. I appreciate you.

You’re doing a great job, Mama. Keep on keeping on. You got this. 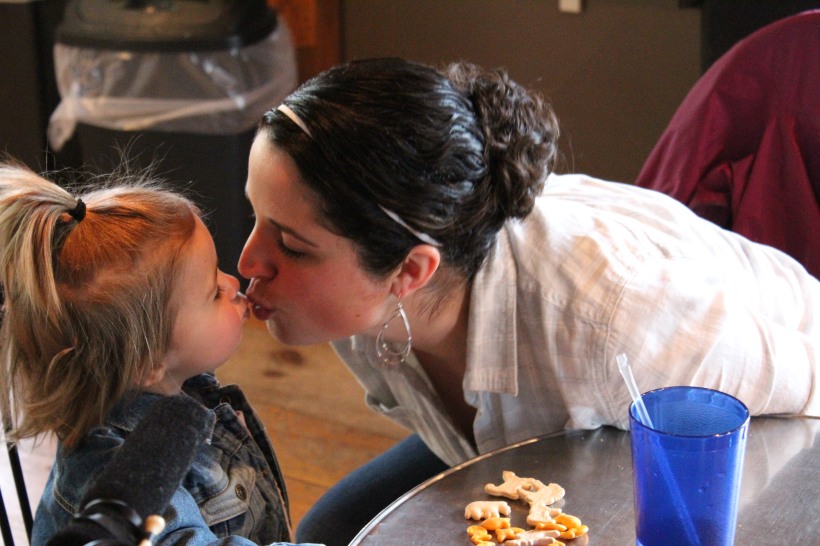 One thought on “My Daughter is a Pitbull”