It’s 6am and she’s peeking cautiously into my room, illuminated by a halo of early dawn light.

She just needs a snuggle she says, and then she’ll go back to sleep. It’s a lie and we both know it but I lift up the covers anyway and she presses her warm body into mine, her fingers reaching around my waist and onto my belly.

“Why is your belly so wrinkly, mom?” She asks playfully, already dismissing her promise to sleep.

Fifteen years ago that question would have burned a hole in my brain – setting off a cascade of self hatred and ever tighter food restrictions. But this morning I smile, two babies and a decade of therapy later.

“That’s the extra skin from when my belly grew big enough to hold you,” I tell her.

She presses her fingers over the dimpled stripes and smiles. “I like them,” she says.

I’d be lying if I said I felt the same, but I’ve come a hell of a long way, posting my “tiger stripes” on the Internet for the world to see.

This is my mom bod and I worked freaking hard for it. Two babies (including a 9-pounder), almost 20 months of pregnancy, a few too many trips to Taco Bell and hundreds if not thousands of 10-minute miles built this body.

I would not normally be posting pictures of my mom bod on the Internet – or wearing a two piece bathing suit for that matter. But a couple of weeks ago I got a text from my friend Meaghan. She’s a fashion designer in NYC and has been working on a new line of lingerie, swim and sleepwear for a company called uncommon|sense. She wanted to know if she could send me a couple items to review on the blog.

Are you sure? I asked in my head. I don’t think anybody wants to see this body in a bikini.

“I do!” Dan chimed in. “I’ll take the pictures if you let me in the dressing room,” he added with a wink.

And so here we are, 3 weeks later, and the prettiest package filled with seriously the softest clothing I have ever touched has arrived in my mailbox. I am smitten, and terrified. 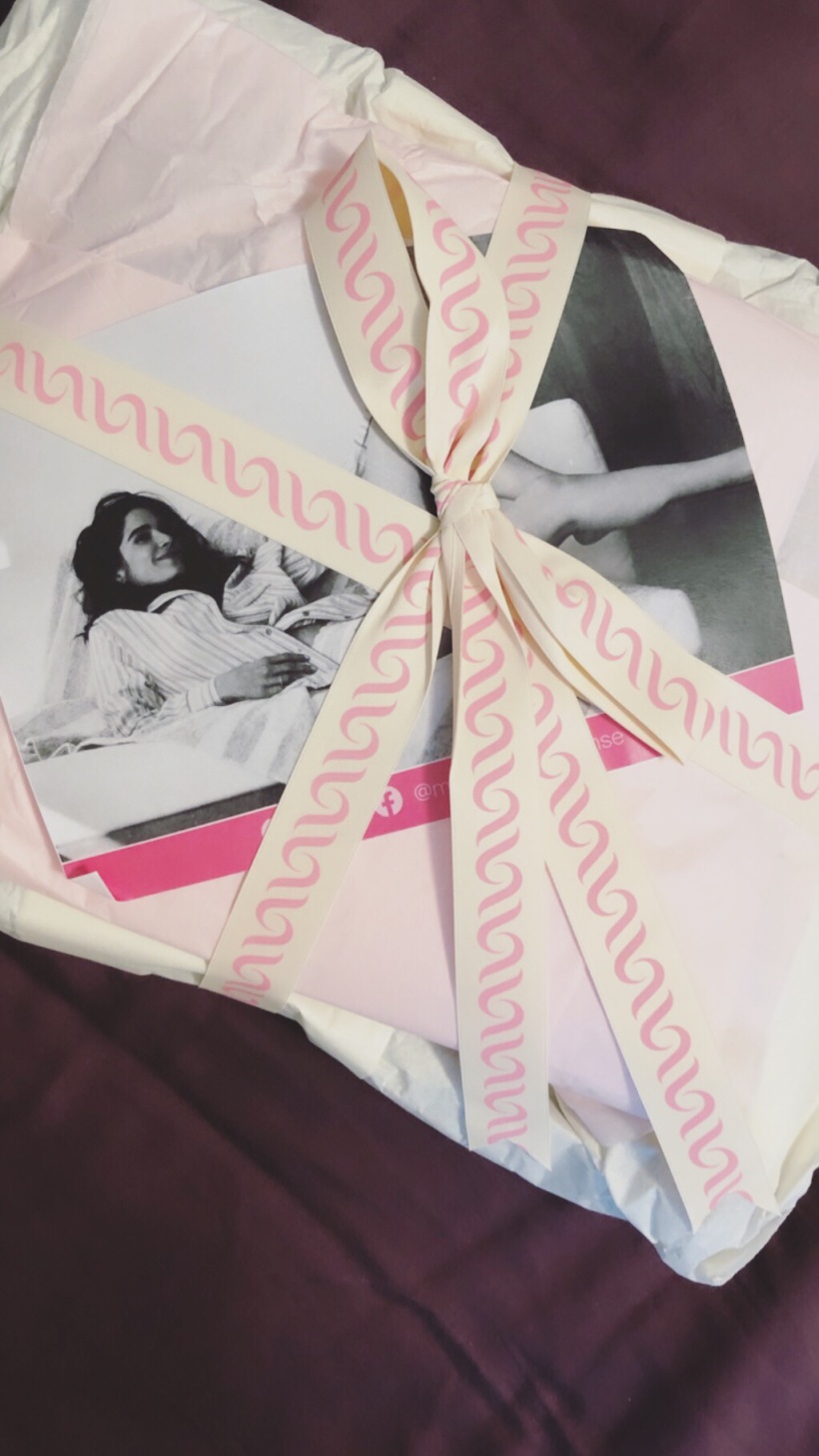 As I tried on each piece Dan quietly snapped photos, saying nothing and offering no feedback because he is a guy and knows better than to step on a land mine.

Me: Dan, you have to tell me if I’m sitting in a way that gives me rolls… 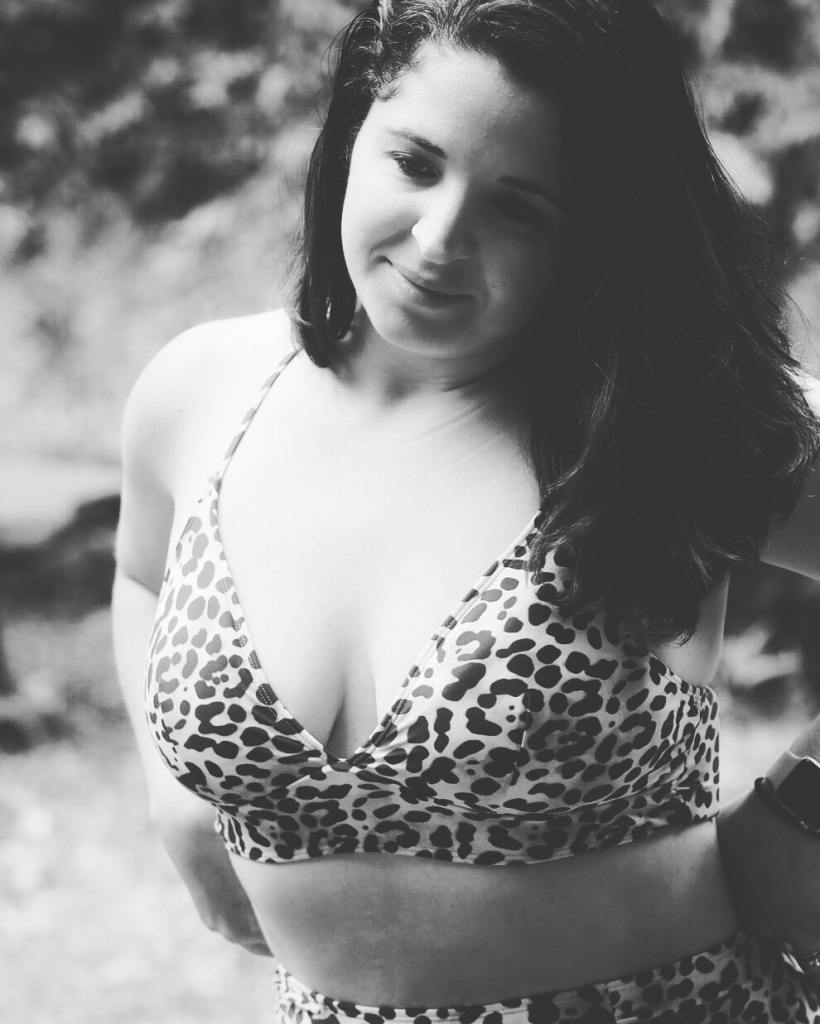 But in the end a couple of the pictures didn’t make the internet cut, because dan wanted to keep them for himself. So I think that says everything you need to know about the lingerie 😉

And the rest, well, it’s like skinny dipping in clothes. You know that feeling when you first jump in the water and it’s like magic all over your body? That is what these fabrics feel like. Perfect for sleeping, swimming, momming and everything else really because let’s be honest, I pretty much live in loungewear.

This is the Us-sentials Ribbed Hoodie in “Mariner” and it is my new weekend uniform. 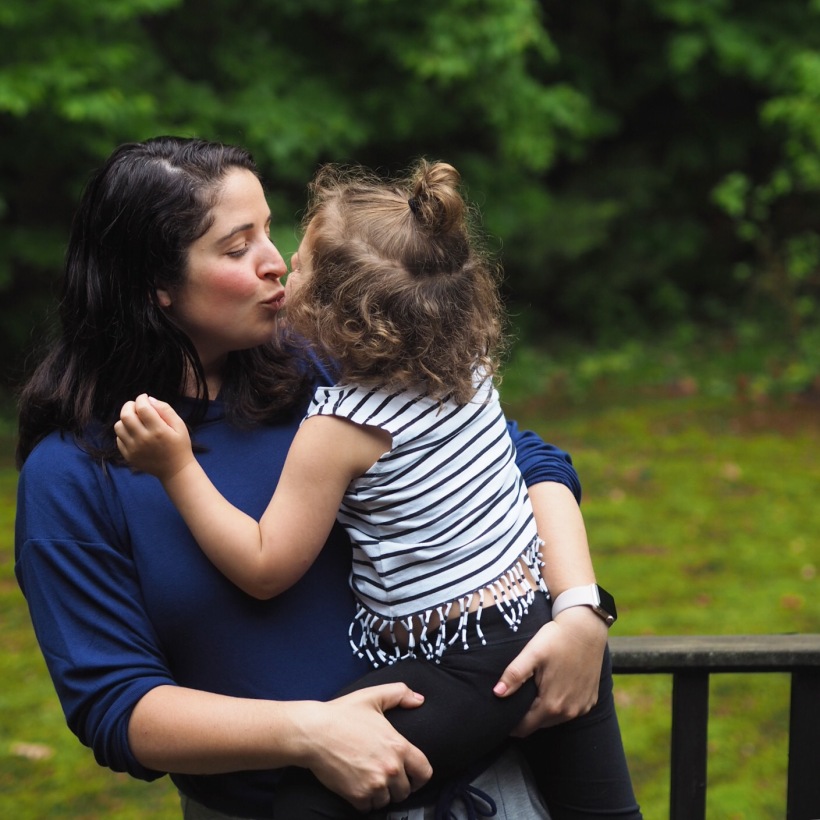 It is the softest and lightest sweatshirt I’ve ever owned and drapes perfectly over a cami, bra, or, errr…nothing at all. I’m 5’3″ and 36D wearing a medium and it’s a perfect fit.

I paired the sweatshirt with these Us-sentials Joggers (also wearing a medium) and they legit feel like silk. They’re meant for sleep so they are thin and lightweight, but with the right underwear I would totally wear these to the grocery store. Don’t judge me. 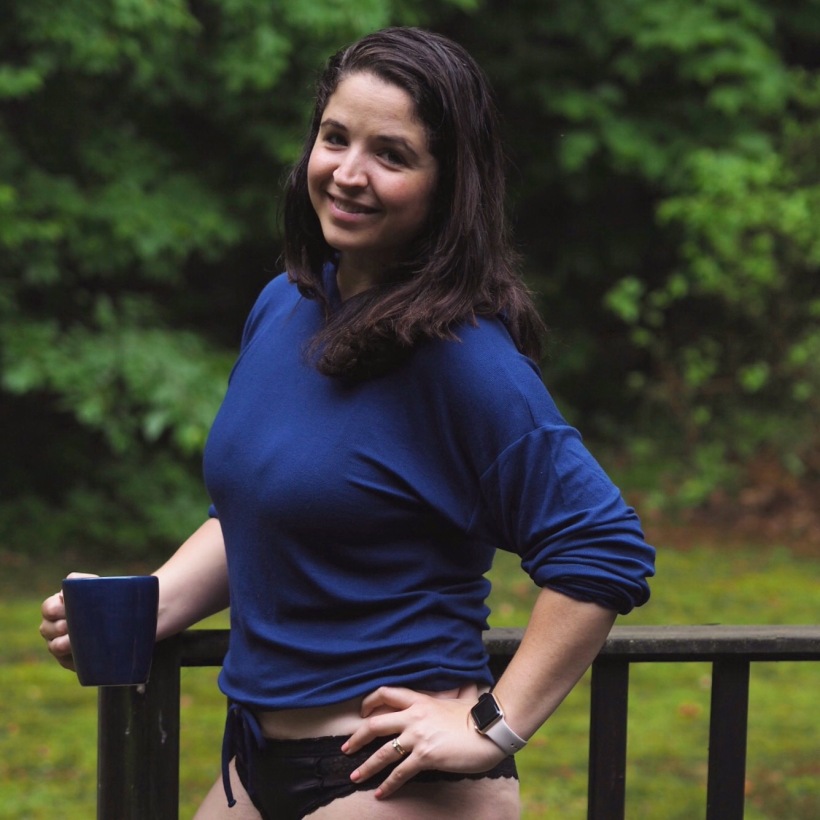 Speaking of the right underwear…Dan kept most of these photos for himself but here’s a little peek at the Animal Mesh Cheeky underwear. Super cute. I’m also wearing the Seamless Plunge Bralette in black underneath the sweatshirt – but I forgot I had it on because it’s that soft.

The last thing I had to try on was the bikini. My nemesis. But to my surprise I kind of loved it. 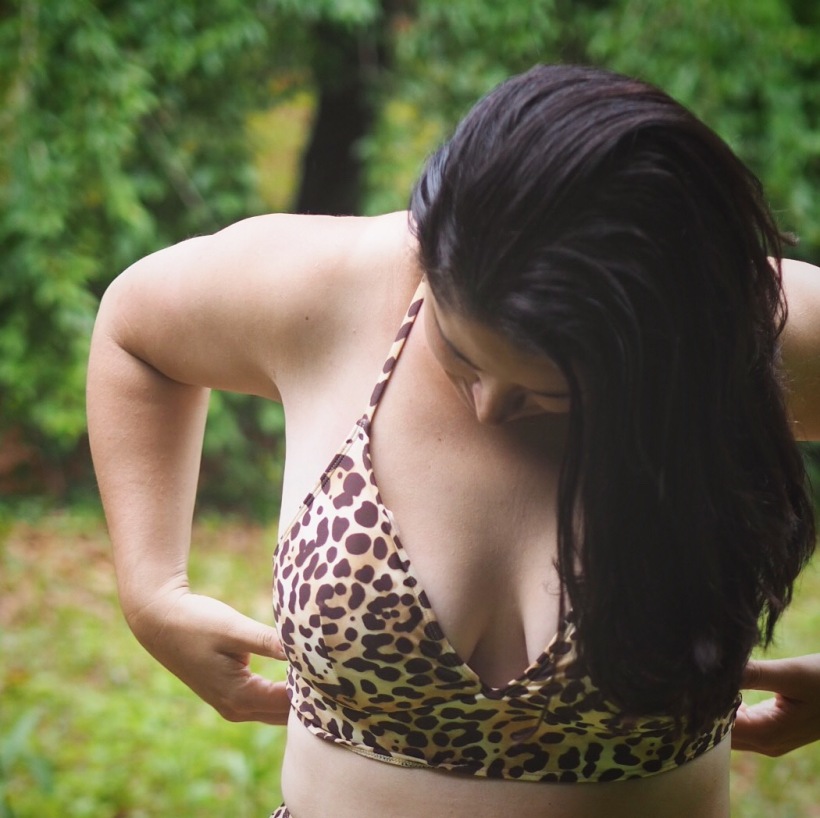 The high waisted bottoms (once again I’m wearing a medium) are perfect for the mom bod, and the strappy back bikini top (I’m a 36D and I’m wearing a large) is seriously SO GOOD. This mama is bringing sexy back, in leopard print of course. 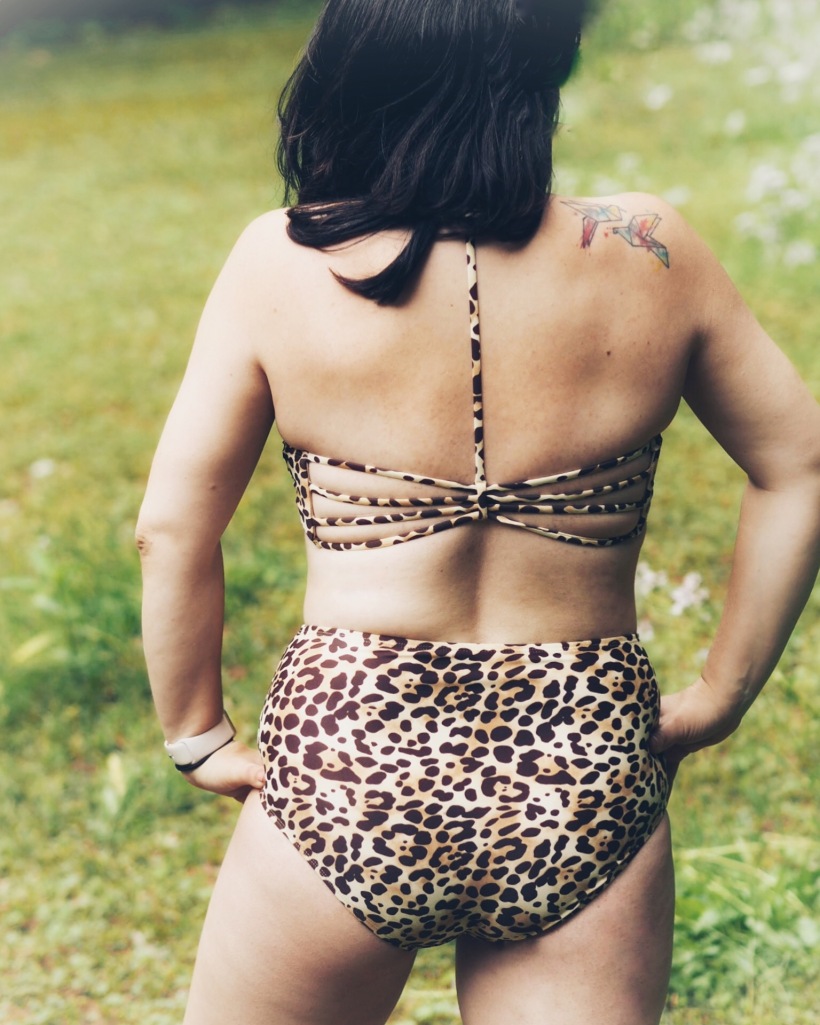 I also love that all of the uncommon|sense swimwear is sold as separates, so you can mix and match both styles and sizes. Oh, and everything I tried on sells for under $50 so it’s not only mom-bod approved, it’s mom-budget approved too.

In the end I realized I’m probably not cut out for full time fashion blogging, mostly because it’s just insanely awkward trying to figure out where to put your hands and what to do with your face during a “lifestyle” photo. 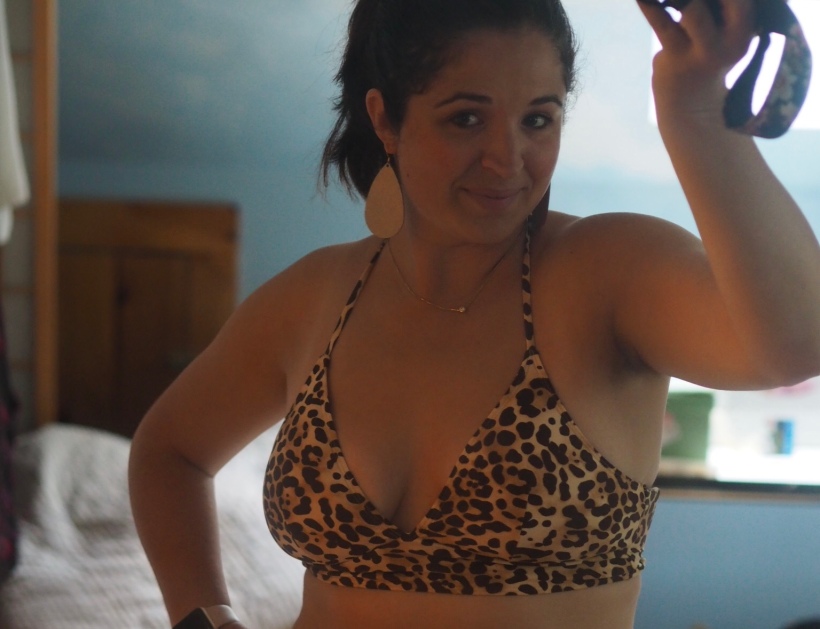 I’m definitely more comfortable on the other side of the camera. 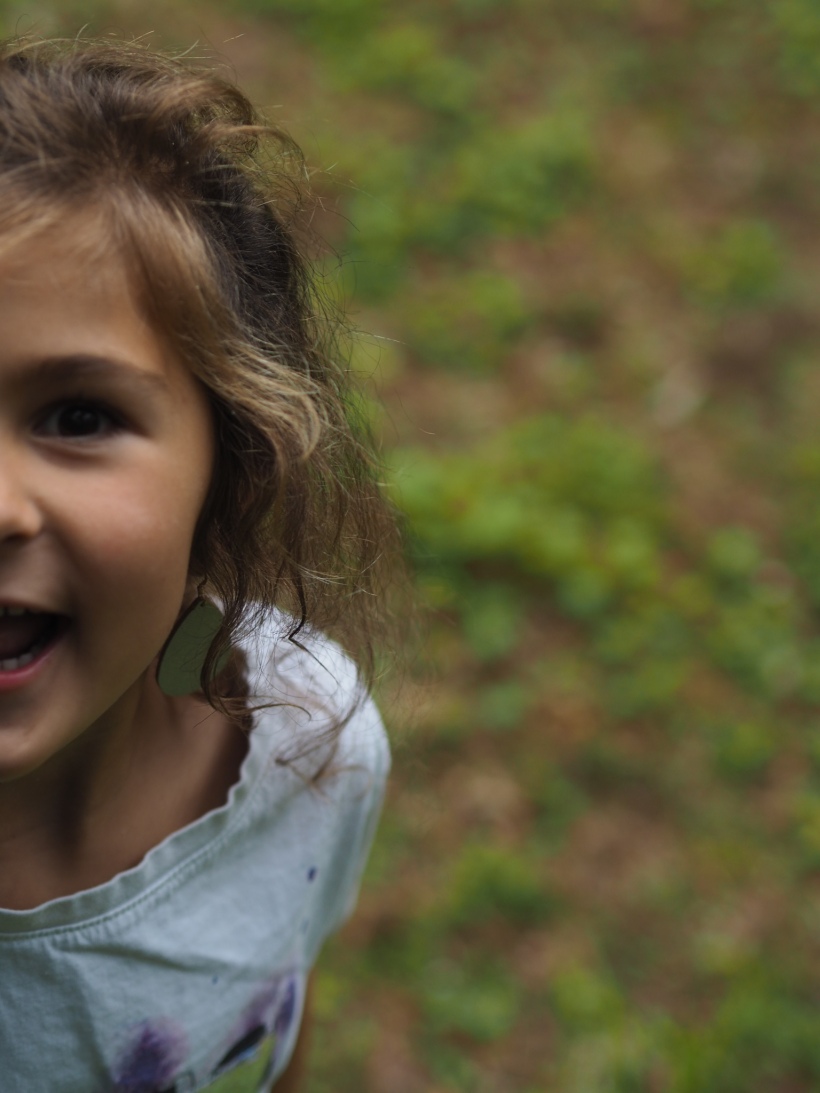 But I will continue to flaunt my mom bod with (at least a little bit of) pride because it is strong, courageous, and did a damn good job making my beautiful babies – for that I will always be grateful.

Also v thankful to uncommon|sense for the beautiful clothes, and the opportunity to take a spin on the opposite side of my camera.