Sorry, I thought I was in a MasterCard commercial for a second. One that could only air in the United States where it’s more expensive to birth a child than it is to buy a semi-automatic weapon.

The things you don’t think about until it’s 16 weeks too late, are the fact that two carseats, a dog and a shit ton of “gear” will not fit in a Honda Accord. Or a Toyota Camry. Fuck.

And so the search for a new (used) car begins.

It’s starts with Dan stating that we should probably get something that will fit all of our stuff and be practical now AND in the future, like maybe an 18-wheeler or 747 jet.

Then it’s me telling him to downsize his expectations because the budget is $8,000 (the approximate value of Dan’s old car). So maybe like a 1998 Ford Fiesta or Chevy Spark or Radio Flyer Wagon.

Dan then accuses me of being a completely unreasonable and stingy bitch, and I reply with something snarky like “damn right, and you can thank me for it every day you don’t have to cash a welfare check.”

Then we go back to fighting over whether Dan’s old car is actually clean enough to put up for sale, and whose fault it is that neither of us can locate the title.

Two days later Dan’s car is sold for $8,000 (pending the receipt of the new title we had to apply for at the DMV – a blog post for another day) and I reclaim my status as “Queen of Craigslist.” Seriously, though, I can sell ice to Eskimos on Craigslist. And I’m thinking about adding that to my resume.

So after about an hour (who am I kidding, like 3 minutes) of celebrating the fact that we sold Dan’s car so quickly, the search intensifies for a new vehicle. One that can be obtained within 12 days, which is the amount of time it takes to “rush” process a replacement vehicle title.

For about 5 minutes there is peace, as Dan and I both agree that a Honda Pilot or Toyota Highlander would be an acceptable vehicle. But then the Craigslist scouring begins and only one Honda Pilot with less than 100k miles is located for under $12,000 (see what Dan did there – he somehow got the budget from 8k-12k without me even noticing). Said Honda Pilot is located in Revere (Massachusetts) and is “SELLING FOR 2K UNDER BOOK VALUE BECAUSE I WANT TO GIVE SOMEONE A GOOD DEAL.” Haha! After further inspection, book value for the car is found to be around $11,500. I start to text the seller, but then realize that based on the amount of capital letters and emoticons in the post, the reply will probably be something to the effect of “a/s/l?” (For those of who have no idea what that reference is, you obviously did not frequent predator-laden internet chat rooms in the 90s. Just move on.)

For the next couple of days, Dan and I send each other Craigslist links back and forth, each ignoring the other’s suggestions completely. We email a couple of people, most of whom respond with things like, “yes, the car is still for sale. It is missing an engine, but it’s an easy fix!”

One day I sent Dan a link to a “cherry” colored minivan to which he replied, “is that for fucking real. I’m not going to drive a purple minivan.”

I reminded him that a minivan is actually a status symbol. Only people who are getting laid drive minivans.

Dan is not impressed.

Eventually I locate a decent (silver) Rav4 in Massachusetts with only 84k miles. I use the fact that it has a towing package (WTF do we need a towing package for?) to convince Dan that a Rav4 could work. He bites.

The car is located just down the road from my parents, who go to look at it for us. To make a long story short, the car is decent, my dad gives it his blessing, and we make a (low but reasonable) offer. Rejected.

I’m pissed so we move on.

After two more days of searching and one long and useless drive to New Hampshire in which we looked at one $14,000 car that the sales guy actually admitted “got a little beat up by the last person that used it as a loaner” (RED FLAG RED FLAG RED FLAG) and test drove another that Dan would have paid full price for on the spot and I got us laughed out of the dealership with an offer 2k below sticker price – we decided to call back the owner of the Rav4 in Massachusetts and accept her counter offer.

We had 24 hours of relatively peaceful marriage while we believed our car search was complete.

Then, Monday morning an email comes through stating that the woman with the Rav4 has decided not to sell it.

At this point, full out rage has engulfed our household. Haterade is the drink of choice, and we are drowning in it faster than a football coach who’s team thought they won the Superbowl and then got accused of cheating.

Some quotes from Monday morning:

“You think you’re such a good negotiator but you’re just fucking cheap. To be good at negotiating you actually have to get people to agree, you know.”

“Where exactly do you think more money is going to come from? Do you think I’m hiding a wad of cash under a mattress somewhere? Not that you would ever know, considering the last time you changed the sheets.”

I’ll stop there because it really goes downhill after that. And that is the censored version.

So anyway, after some frantic phone calls to my parents, declaring that we have given up and will be buying a 1998 Saturn Vue with 170k miles, I walk into work and proclaim to my coworkers that I hate cars and will probably be getting a divorce soon.

One of them recommends a local dealership where she “knows a guy.”

I hate dealerships because because I don’t like to pay for middlemen. I’ve only ever bought cars on Craigslist and I have no intention of ever changing that, especially considering our recent experiences in New Hampshire.

So I go on the website and look at the used inventory and at first I think maybe it’s a mirage but it looks like they actually have a a Honda CRV with only 76k miles that’s IN OUR BUDGET. Turns out, it’s real. So I call Dan and he agrees to meet me there asap.

On the way over he calls me and tells me, actually, he doesn’t want a CRV because he saw one drive by and he just doesn’t like the look of it.

I’ll just skip over this part to make myself look better, but I will tell you that I considered driving my car into oncoming traffic, and I also got hung up on in the middle of my polite and reasonable response to Dan.

By some divine miracle, we both showed up safely at the dealership and the car was actually great and the sales manager was Dan’s mom’s neighbor and my coworker who “knew a guy” actually knew the General Manager and about an hour later we walked out of there with a shiny used Honda CRV and a giant pink balloon (for Mia) – all for $10,500 bucks. 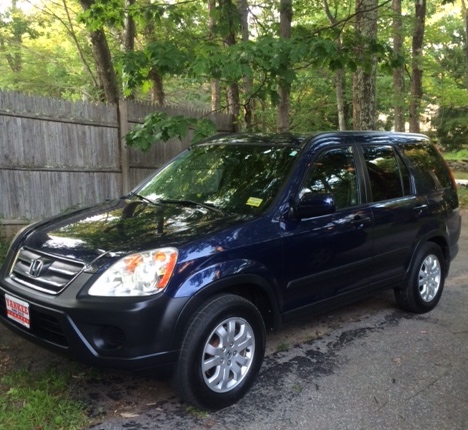 Oh yea, and the reason for all this insanity in the first place: 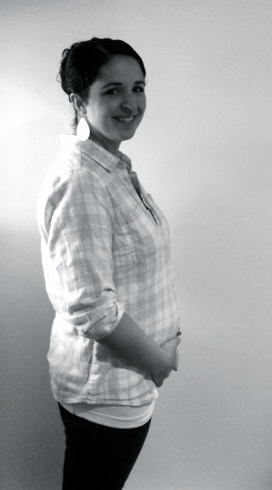 Total weight gain: Still nothing but the belly is starting to say otherwise.
Maternity clothes? and yoga pants
Sleep: A little better, except for the night Mia decided to FREAK the F%^$ out.
Best moment this week: Deciding it’s officially fall and making (eating) apple crisp.
Miss Anything? energy
Movement: Still not yet, I don’t think – although maybe I’m just too cynical this time and pass off all the little kicks as indigestion.
Food cravings: Apple crisp. But I don’t think that’s pregnancy related.
Anything making you queasy or sick: Prenatal vitamins.
Gender: Finding out (hopefully) on 9/29.
Labor Signs: Nooooo, except the night I got food poisoning (yes, I got fucking food poisoning on top of all this pregnancy bullshit) I thought I was having contractions because the stomach cramps were so miserable.
Symptoms: Nausea, exhaustion, and bruises from Mia telling me she wants to “kick the baby.” #bestbigsister
Belly Button in or out? In, for now.
Wedding rings on or off? On.
Happy or Moody most of the time: Depends on whether or not Mia pooped in the potty or on my bed.
Looking forward to: No more nausea and my 16 week appointment this Friday.