Parents make a lot of sacrifices for their kids.

I knew this going into it and was at least moderately prepared to not sleep, give up alcohol for 9 months, and have yet another person continuously trying to suck on my nipples.

But I was not prepared for camping.

I mean, I did plenty of camping growing up. Often the kind that involved peeing in the woods and always the kind the required sleeping on the ground. But I honestly don’t remember much of it and I think maybe I’ve just blocked it out like people sometimes do when they’ve been through a trauma.

For sure as an adult I had never voluntarily gone camping.

Our kids were 2 and 4 and Dan convinced me that their childhood’s would be incomplete without camping. It would stunt their emotional growth, or something bullshit like that. He said we would go with friends, and bring a camper with a real bed, and put the kids to sleep at 8 and sit by the fire and drink margaritas and make s’mores. And I was like yea that sounds great, when should I pick you guys up?

But he didn’t laugh or even smile and he rolled his eyes at me in that way that means if I ever want him to paint the living room I am going to have to go fucking camping.

So this happened: On Camping with Toddlers and Other Circles of Hell.

After that giant shit show of a trip, I did two things.

So Dan was like, you know, another camping trip would be great content for your blog. And then he painted the living room and told me I picked such a nice color (white) and just tossed it out there, like, oh we should probably call Margie and Jerry about making our camping reservations for next summer, don’t you think?

And I thought about all the painting I needed done in the kitchen and picked up the phone to make the damn reservation. #marriage

So the second annual camping trip became a thing – and this time everyone knew I was being dragged by my teeth so they made sure to remind me how great it was going be, and how it definitely wouldn’t rain this time and that would make everything better.

But we didn’t even make it to the campsite before Dan and I were screaming at each other over who was supposed to pack what and whether we really needed $70 worth of alcohol and why chicken salad was removed from the meal plan.

Dan kept threatening to just “cancel the whole trip” which I found particularly hilarious since that was essentially my ultimate goal.

But alas, the trip did not get cancelled and before we knew it we were halfway to New Hampshire listening to Lucy scream about the loss of her rubber ducky that she threw out the window of the truck.

In typical kid fashion, both the girls fell asleep in the car about 5 minutes before we got to the campsite, so they were in an especially vile mood as we sat at a damp picnic table and watched Dan and Jerry try to park the camper (make sure to watch with the sound on).

Then it was off to the pool so the kids could swim with 27 other dirty toddlers amongst all their floating bandaids.

By the time we managed to drag the kids out of the pool and back to the campsite, they were ready for dinner like 3 hours ago. So we used every pot, pan, plate and cup in the camper to cook tacos – and then deconstruct them so the kids would eat them. By 11pm we had 2 out of 5 kids asleep, plus Dan. Margie and I went to bed shortly after because we knew the kids would be up in a few hours. Which they were.

Lucky for me, Dan knew this entire trip was balanced very precariously on my ability to not completely lose my shit so he took the kids out of the camper and let me sleep until 715 – and then sent me on a trip to Dunkin for coffee as soon as I woke up. By the time I got back to the campsite, the kids were already elbow deep in pancakes, and the boys were off to pick up tubes so we could float down the river. 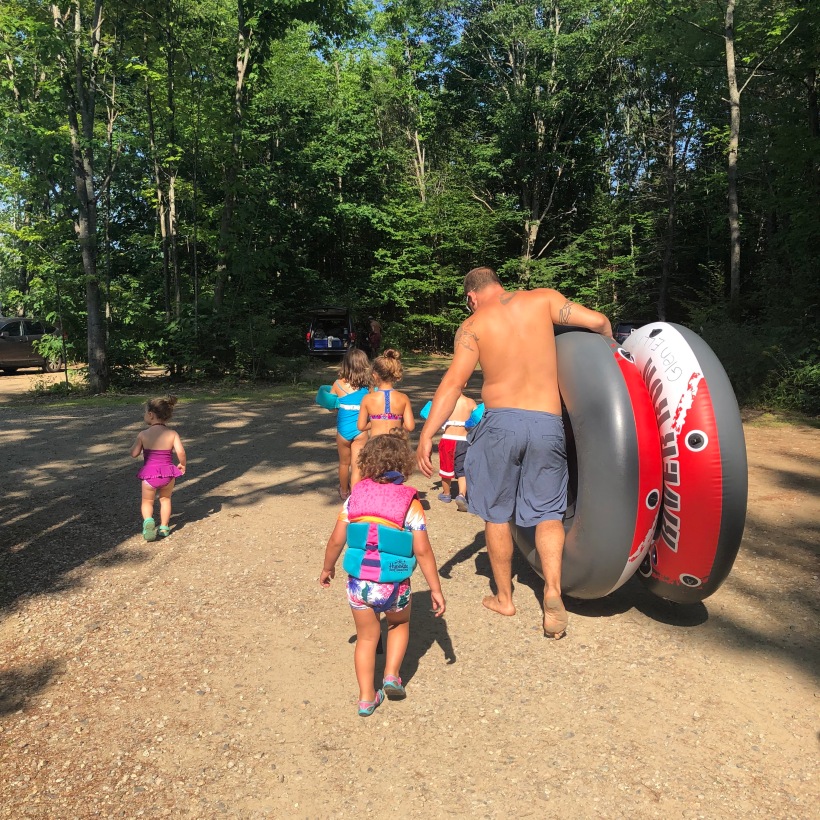 The river float was actually one of the nicest parts of the trips. All of the kids except Mia hated it and begged to go to the playground the entire time, but the river was too loud to hear the kids whining and it was still so early in the morning there was nobody else out there. It was actually kind of peaceful. 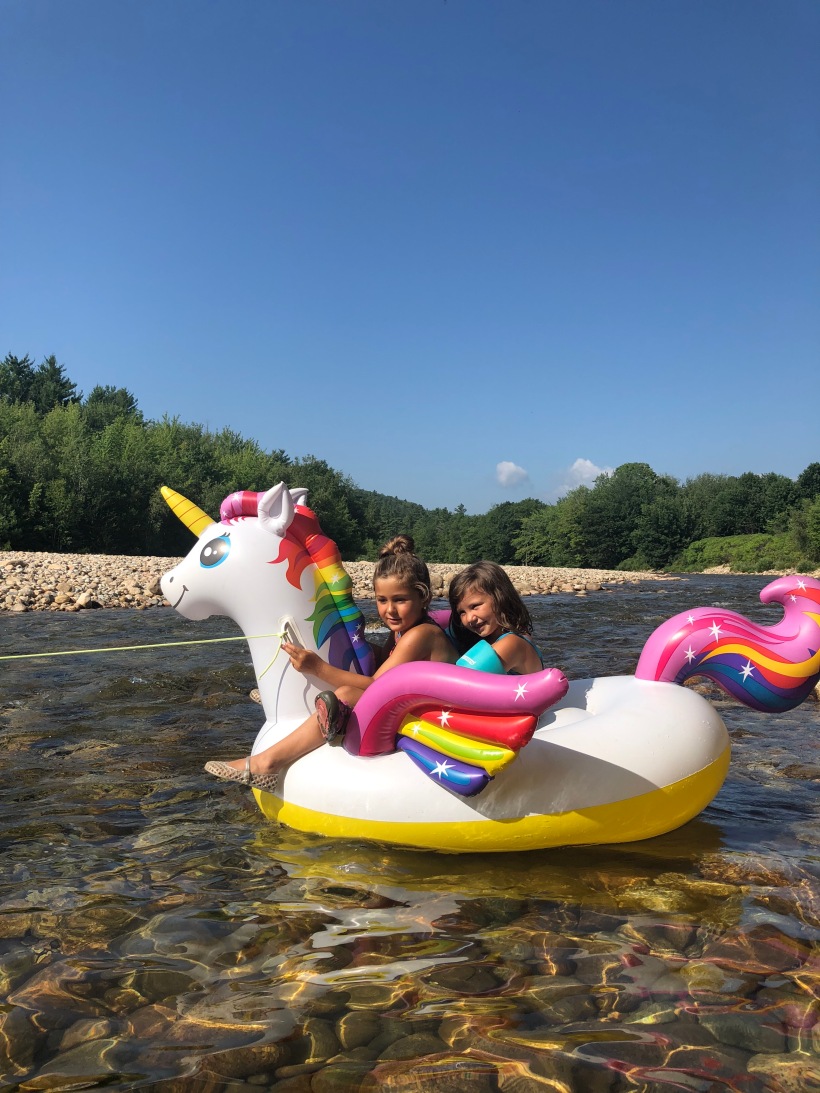 That afternoon we made a quick (3 hour) trip to Storyland, which was the opposite of peaceful, but at least they had coffee and regularly cleaned bathrooms.

Then we head back to the campsite around dinner time for some more playground time, more of me pacing around the campground trying to clean it up, and more of the kids refusing to go to sleep and simultaneously melting down. 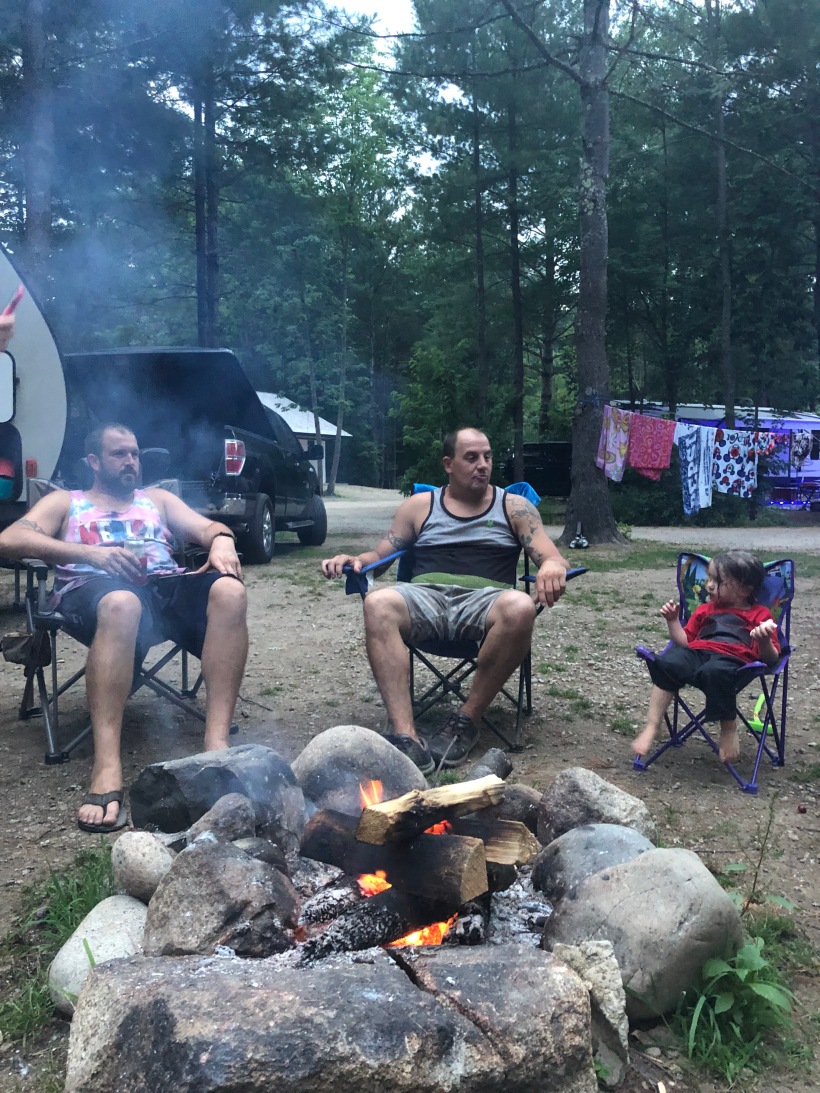 The next day we left early for Storyland and made it about half a day before dying of heat exhaustion and calling it quits.

Dan stopped on the way home to get more beer (update: $70 worth of alcohol was not enough) and buy new flip flops (he broke his in the river) and I literally snuck out of the grocery store while Dan was shopping and ran next store to Dairy Queen to eat a Blizzard by myself. #selfcare

That night the kids actually went to bed at a reasonable time and Dan built a nice fire and all the adults were sitting around it chatting, getting ready to roast some marshmallows. Dan even looked at me and said, “see Hannah, camping can be fun!”

And literally as he said it the wind picked up, the skies opened, and sideways rain started pelting the campsite.

Everything was soaked within 3-5 minutes including all of us, running around trying to pull clothes off the line, grab chairs that were flying away in the wind, and keep Margie and Jerry’s tent from collapsing.

The next morning I read about the “random microburst” that hit Glen, NH the night before and I just laughed hysterically because OF COURSE IT DID.

The following day was our last day which always feels the most hopeful. We started packing up the campsite pretty much as soon as we woke up because we knew it would take at least half a day to pack up all our shit and locate our kids who all decided to wander off into the woods without telling anyone. ISN’T CAMPING SO MUCH FUN?!

We left around 11am after 27 last minute trips to the bathroom and 15 visits to the arcade to physically remove our gambling addicted children. Like, how is this even camping when they have video games. Campground camping is basically just everyday life without indoor plumbing and just…why?

We left the campground at 11 and drove to a mountain somewhere that supposedly had a 175 foot waterfall at the top. We were told it was a 1 mile hike to the waterfall, and that it would be fine to do with kids. That was a lie.

The entire hike was 3.7 miles, with almost 1000 feet of rocky elevation and it took us the longest 3 and half hours of our lives to accomplish. 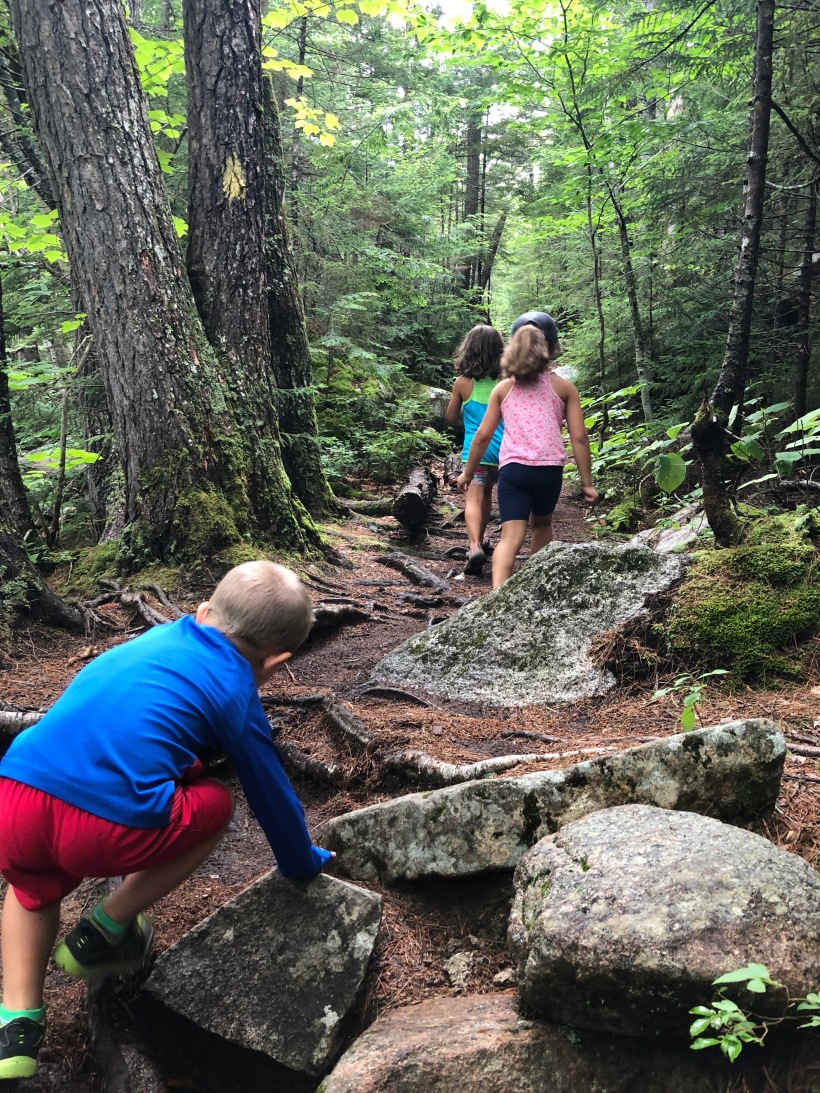 During the forced march we learned that Lucy is actually an excellent hiker, but only when she gets to be in the front. And that Margie is in fact 100% stronger than everyone everywhere, as she carried her 30-pound toddler 3.5 miles of the 3.7 mile hike. In her arms – without a carrier.

We concluded the trip by driving to Moat Mountain Brewery for lunch – missing the turn – trying to turn the camper around in a dentist office parking lot that was approximately the same size as the camper – and getting home 3 minutes before the deadline to pick up Harley at doggie daycare.

And to think some people call this “vacation.”

Until next year, blog readers… I’ll see you at the Four Seasons 😉

P.S. Because Dan will get mad at me if I don’t, I’d like to note that there were limited periods of time during the trip (like when the kids were asleep and the alcohol was fully stocked) that were fun. Also my car ride to Dunkin Donuts.

The trip was a relative improvement over the previous year. Also, Dan took this really pretty picture of the river at 5am, while all the normal people were sleeping.

3 thoughts on “I Went Camping Again and It Still Sucks”